I just finished reading Peter Sim’s Little Bets (great read, recommended by my good friend Janine Saunders) and was struck by a section that describes the difference between lucky and unlucky people.  I’m sharing it with you because I think it has applications to networking, business–and learning how to create your own lucky life. 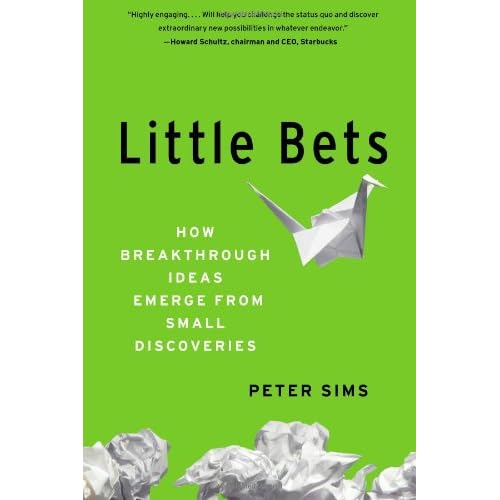 To understand whether different behavioral patterns characterized lucky versus unlucky people, Wiseman performed a series of experiments on four hundred people, and summarized his findings in his book The Luck Factor.  His study sample included people from all walks of life, ranging in age from eighteen to eighty-four, including secretaries, doctors, computer analysts, factory workers, and businesspeople.

Wiseman and company began by surveying people about whether they perceived themselves to be lucky or unlucky.  They found that 50 percent of the respondents considered themselves to be lucky, 36 percent felt they were neither lucky nor unlucky, while fourteen percent said they were consistently unlucky.  So, for example, a forty-two-year-old forensic scientist named Jessica exemplified someone in the “lucky” group.  “I have my dream job, two wonderful children, and a great guy whom I love very much.  It’s amazing; when I look back on my life, I realize I have been lucky in just about every area,” Jessica shared.

Meanwhile, a thirty-four-year-old care assistant named Carolyn epitomized someone in the “unlucky” group.  As Wiseman wrote, “She is accident-prone.  In one week, she twisted her ankle in a pothole, injured her back in another fall, and reversed her car into a tree during a driving lesson.  She was also unlucky in love and felt she was always in the wrong place at the wrong time.”

Over the next several years, Wiseman sought out differences between these self-described “lucky” and “unlucky” people.  He performed in-depth interviews, asked people to complete diaries, and administered a battery of tests, experiments, and questionnaires.  So, for instance, in one experiment, Wiseman gave both self-described lucky and unlucky people a newspaper and asked them to count the number of photographs is contained.  He found that it took people in the unlucky group roughly two minutes to complete the task, whereas it took people in the lucky group just seconds.  “Why?”  Wiseman recounts, “Because the second page of the newspaper contained the message: Stop counting.  There are forty-three photographs in this newspaper.”  The message took up half a page and the typeface was more than two inches high, nearly impossible to miss.  According to Wiseman, “It was staring everyone straight in the face, but the unlucky people tended to miss it and the lucky people tended to spot it.”  Even more, as Wiseman describes it, “For fun, I placed a second large message halfway through the newspaper: ‘Stop counting. Tell the experimenter you have seen this and win £250.’  Again, the unlucky people missed the opportunity because they were still too busy looking for photographs.”

As the newspaper photo counting experiment illustrates, one obvious implication from Wiseman’s research is that lucky people pay more attention to what’s going on around them than unlucky people.  It’s more nuanced than that.  Here’s where being open to meeting, interacting with, and learning from different types of people comes in.  Wiseman found that lucky people tend to be open to opportunities (or insights) that come along spontaneously, whereas unlucky people tend to be creatures of routine, fixated on certain specific outcomes.

In analyzing behavior patterns at social parties, for example, unlucky people tended to talk with the same types of people, people who are like themselves.  It’s a common phenomenon.  On the other hand, lucky people tended to be curious and open to what can come along from chance interactions.  For example, Wiseman found that the lucky people had three times greater open body language in social situations than unlucky people.  Lucky people also smiled twice as much as unlucky people, thus drawing other people and chance encounters to them.  They didn’t cross their arms or legs and pointed their bodies to other people and increased the likelihood of chance encounters by introducing variety.  Chance opportunities favored people who were open to them.

Wiseman believed another type of behavior played an even greater role in success.  Wiseman found that lucky people build and maintain what he called a strong network or luck.  He wrote:

Lucky people are effective at building secure, and long-lasting, attachments with the people they meet.  They are easy to know and most people like them.  They tend to be trusting and form close relationships with others.  As a result, they often keep in touch with a much larger number of friends and colleagues than unlucky people.  And time and again, this network or friends helps promote opportunity in their lives.

This was Wiseman’s core finding: You can create your own luck.  “I discovered that being in the right place at the right time is actually all about being in the right state of mind,” he argued.  Lucky people increase their odds of chance encounters or experiences by interacting with a large number of people.  Extroversion, Wiseman found, pays opportunity and insight rewards.  And that makes perfect sense: Chance opportunities are a numbers game.  The more people and perspectives in your sphere of reference, the more likely good insights and opportunities will combine.”

What do you think?  Are you a lucky one?  An unlucky one?  How do you start living your life differently to create more luck and opportunity?

3 Comments on "Lucky People by Choice: Open Minds, Strong Networks, and Spontaneity for the Win"

What Problem Are You Solving?

All diseases begin in the gut.